President Barack Obama in his Indian Villager Avatar – A Caricature that sets him free.

President Obama wonders why he must choose between the devil and the deep sea?
(Read: going after the ISIS but not helping President Bashar Al Asad of Syria.)

After I finished creating the caricature, I thought of giving it a transparent color-wash – so that his caricature matched his colorful personality. (Scroll down to view it.) 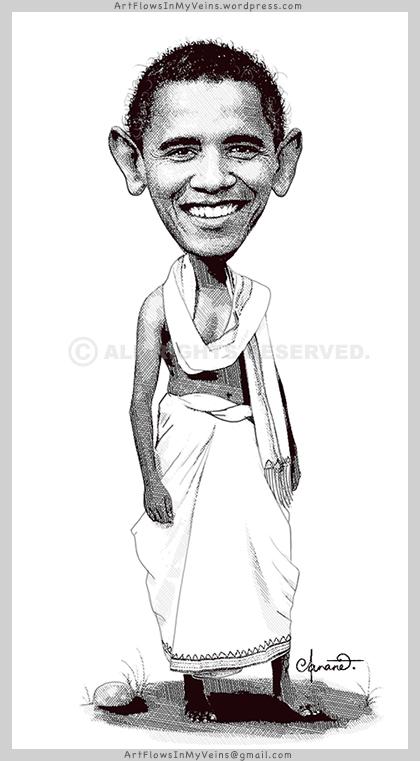 Obama’s Dilemma: To Go After ISIS without Asad or Not:

Yesterday (August 28, 2014) Obama said, “We don’t have a clear strategy yet.” It’s abundantly clear that President Obama spoke the truth. Dropping bombs won’t take out the ISIS militants who are heartless enough to change little kids into killing machines, who massacred more than 200 Syrian soldiers just yesterday,  and who are certainly accepted by some people of the region as their leaders. They’ll have enough civilians sheltering them, and unlike Israel, the US doesn’t have nerves made of steel.

President Obama is faced with a devil and the deep sea situation. They can’t work with Asad because Asad is accused of crimes against his own people; and they can’t get down on the ground and finish the job, without internal help, because the casualties would be too many. The idea of mobilizing support in the region has some merit, but not enough to ensure a victory. The ISIS know the terrain, they’ve got normal families helping them, they are getting jehadis to fight their war from all over the world, including a few from India, and they are catching their new recruits young.

It’s a war that may need some support from Asad.

The question that should be answered is: Were people really worse off in Asad’s regime, than they would be when ISIS materializes completely? Is it possible that refusing to connect with Asad would result in more international soldiers losing their lives? Could those lives be saved?

History always makes us review the past and sigh, “if only we had decided differently.”

President Obama has a slew of advisors who understand the region, and who, I hope, would help him make the right choices and develop “a clear strategy.”

In the meantime, I wonder what would President Obama be saying if he was a country bumpkin from a village in India.

What ISIS? Who Asad?!

So that was the Indian Caricature of today.

3 Responses to President Barack Obama in his Indian Villager Avatar – A Caricature that sets him free.